And we continue from the last post @  K-Drama Review : Noble, My Love (고결한 그대) – Part 1  where we ended with Kang Hoon, a little shocked to see Yoon Seo’s tears and asked her to go to him.

“So….. come to me then!” At those words, Yoon Seo was totally shocked and asked him “You mean moving into your building?” Kang Hoon tried to explains about wanting to work with her but her phone rang interrupting him.

Ending the call with Jin Kyung (Yoon Seo’s close friend), she grab Kang Hoon’s tie and yank him closer threatening that he will get it from her if he messes with her again. Arrogant Kang Hoon asked her how is she going to deal with him….

Angrily, Yoon Seo stomps on his shoes. When he yanks his foot out, she toppled backward only to be captured by Kang Hoon. He let her go only after she promised to calm down. Setting her firmly on her feet again, she pushes Kang Hoon while earning a smirk from him. Snarling at him, she slap a post-it note with her account number asking him to wire her security deposit and promise to move out by the end of the week.

Kang Hoon totally lost it… he was laughing so loud to the amusement of his assistants after Yoon Seo left.

Yoon Seo met up with her Jin Kyung at a dance cafe. To her surprised, an old college buddy, Woo Sang Hyun (starring Park Eun Suk) had returned to Seoul recently and has started the dance club.

Sang Hyun left to take a phone call when Jin Kyung asked Yoon Seo about what happen earlier when she called her. Yoon Seo sighed and shared with Jin Kyung about having to move her hospital. Jin Kyung gave her a packet of money to help her.

Moon Yoo Ra (starring Seo Young) came and joined them while sneering at Yoon Seo. While Yoon Seo was getting more and more annoyed with Yoon Ra, on cue, Kang Hoon called her phone. She cancelled the call. He text her and threaten to start demolition the next day.

Yoon Seo cursed Kang Hoon under her breath which earns Yoo Ra another sarcasm about Yoon Seo becoming a wild woman in the hinterlands. This pushes Yoon Seo to announce that she would be opening her own hospital in the neighborhood in several days time.

Back in the ‘new’ hospital, she said to Kang Hoon that she will take the hospital as the price for saving his life but as a loaner which upsets Kang Hoon that rebukes stating that she is the owner of the building. Yoon Seo stated that she understands that she ‘owns’ the building and will be a long-term tenant. He agrees and grabs her hand for a firm handshake.

Kang Hoon is slowly falling in love with Yoon Seo. After a tiring day of cleaning, Yoon Seo fell asleep on the desktop which gives Kang Hoon a closer look on her face. She happen to open her eyes and both were nose to nose for a moment.

Yoon Seo thought she was dreaming and was started rubbing his cheeks in her dream only to be woken up by Kang Hoon when he asked her to remove her hand.

While Yoon Seo was looking for her accommodation as the hospital does not come with quarters where she could stay, Kang Hoon offered her to stay in his house. That immediately earns him a yell from her calling him crazy.

The hospital is finally opened. Unfortunately, Jin Kyung is not able to attend as her mother is having an operation. In the meantime, Kang Hoon through his PA Kang delivered a large flower arrangement to the hospital. PA Kang also delivered the message to Yoon Seo that his boss would like to take her out for a celebratory lunch.

While Kang Hoon was waiting for her in a cafe, Yoon Seo was using PA Kang as manual labor. Both of them sat down for some jjajamyun when the door was open and an angry, confused and hungry Kang Hoon step in. It is so funny to see PA Kang quickly chokes down the noodles and scurries out of the door.

Both of them sat down finally for lunch when it was interrupted with Sang Hyun showing up with a small bouquet. Both men finally met…. hahahaha…. 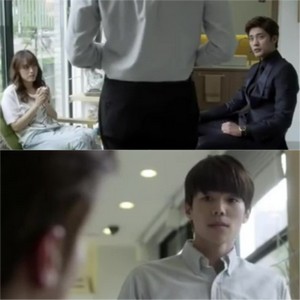 Outside, Moon Yoo Ra was walking past with her poodle and was surprised to see the hospital. She quickly called another bitchy friend to make arrangement to bully Yoon Seo.

When Yoon Seo was meeting her bitchy friends in a trendy restaurant with Jin Kyung, guess who else were to sitting and observing from another table? Kang Hoon sent a bottle of wine to the ladies’ table to the puzzlement of Yoon Seo. When their eyes met, he gave half a smile…

Venting her frustration in the bathroom, she text Kang Hoon to meet her outside of the bathroom. Both of them met up and using the opportunity, he crowd in very close asking why is she there… To Kang Hoon’s puzzlement, he wonders why she is so different from other women as she does not like the special attention / treatment that he is extending to her.

Lunch is finally over and it is time to pay. To Yoon Seo’s surprised, she was told that her bill has been settled by the man who bought her the bottle of wine. Stepping out of the restaurant, to the amusement of her waiting friends, Kang Hoon was waiting for her and told her to get into the car.

Kang Hoon asked her to meet up with him instead of her useless ‘friends’ if she has the free time. He brought her to a nice park and then he dropped the bombshell asking her to be his girlfriend as his shield from all the match-making that his family is setting up for him. While Yoon Seo was hopping mad, Kang Hoon stayed very calm as he tries to convince her to a contractual relationship.

Flustered, Yoon Seo went to the dance cafe to get over her flustering reaction each time Kang Hoon step into her personal space. Dancing with Sang Hyun as her dance partner, puzzling, she felt calm and not a single bit flustered even when they were holding hands.

But her heartbeat skyrockets again the moment Kang Hoon called her mobile. She blurted out that she is busy and hangs up on him.

After the dance lesson, the gang heads out for some drinks, snacks and introductions. Yoon Seo decline Kang Hoon’s call again. Annoyed, Kang Hoon showed up the following day in her hospital. He is ready to talk about the offer and detailed his thoughts. The contract is for three months only and if it is successful, she gets the hospital for free and will no longer be in debt with him.

In the evening, Sang Hyun showed up with a woman in tow with her sick dog. Aww… Sang Hyun wanted to see her so drove to her hospital with the woman as a reason. As they were leaving, Kang Hoon pulls up.

A tired Yoon Seo was not even surprised to see him. He wanted to know if ‘the man’ owns the dog. She didn’t answer but slumps a little only to be caught by Kang Hoon in his arms. She tiredly told him that she is okay.

To be continue…… so stay tune!

A person who love to break the rule, forgive quickly, love truly, laugh uncontrollable and never regret anything that made me 'SMILE' View All Posts